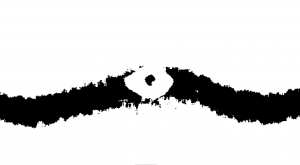 Radient Eye explores what an extramissonary VR might look like by producing a drawing of an ancient oil lamp; objects which were believed had the capacity for sight since they emit light just as the eye was believed to. The drawing was produced by scanning it with a Kinect sensor and custom software which produced a screen recording showing a black and white image as the scanner is moved across the oil lamp. The Kinect sensor does this by sending out infrared light which bounces off the object, returning to the sensor and a computer where it is turned into a black and white image reminiscent of ink drawings. This is the same process that is used in 3D scanning and the creation of point clouds and other 3D images. It also closely resembles the extramissionary concept of vision, with beams of light going out from, in this case the sensor, and touching the objects before it.