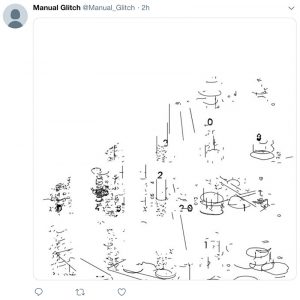 @Manual_Glitch (2016) is a Twitter bot version of Manual Assembly which generates new ‘drawings’ daily. Here the code is not visible at all and nor is it presented in a gallery context. Comments from those who liked or followed the bot did not mention code or workings at all and focused instead on the novelty and currency of the images. For example, commenting that more people should know about and share the images produced. It had lost some of its identity as a generative process and artwork. Instead the images produced became the focus as they were enmeshed in a network. Each image, detached from the process, becomes what Rubinstein and Sluis call a “networked object”. The agency of the code and how it was made are gone but it has gained new agency as the emphasis shifts to the “processes of valorization within computational culture”. The system of the Generative Artwork has intersected with the system of twitter, a situation with the potential for unexpected results that may overcome the human limits/intentions encoded into the system.