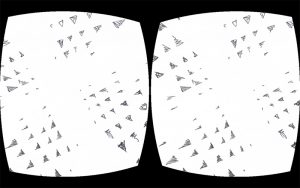 Expressions of Ideal Relations (2019) is a drawing of an equirectilinear grid presented as a slowly rotating animation which can be viewed as a single screen film and in VR. It has been created by drawing the spaces between the lines of a flat equirectilinear grid before taking this into VR where it becomes a 360 degree photosphere. This work reveals the role of the perspectival grid, and the way we are preconditioned to see it, in creating a sense of space in VR. It also hints at the possibility of a more suggestive and ambiguous creation of space through the free from drawn scribbles that define the rigid grid.